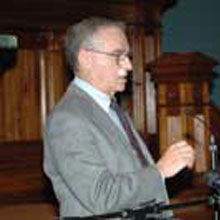 To ensure a quick response from the firm, please check your “sent” box in your default email application to make sure that your email was successfully delivered to us.

Practice Areas
At the present time much of my work involves representing nonprofit organizations that develop affordable housing for low- and moderate-income Vermont households using Internal Revenue Code Section 42 and Section 47 tax credits. I performed similar work in Maine and New Hampshire until the Northern New England Housing Investment Fund was formed, and helped with the formation of the Maine Housing Investment Fund, its predecessor.

Public Service
I have enjoyed performing public service throughout my residence in Vermont:

More About Me
My wife, Leslie, and I live in Lyndon, Vermont and have one child, William, who lives in Larchmont, New York.

I grew up in Pawcatuck, Connecticut and graduated from the University of Pennsylvania in 1961 with a B.A. in American Civilization. I joined the Connecticut National Guard in September of 1961, attended graduate school for one semester pending active duty service, and was on active duty at Fort Dix and Fort Lee until August of 1962.

I then began work at the National Security Agency, and left two years later to attend Albany Law School, from which I graduated with an LL.B. in 1967. I was admitted to the practice of law in Vermont in December of 1967. My wife and I moved immediately to the St. Johnsbury, Vermont area, where we have lived ever since.